New film footage released today shows uncontacted Indians on the Brazil-Peru border in never-seen-before detail. It is the first-ever aerial footage of an uncontacted community.

Ms Anderson said today, ‘What comes across very powerfully from this amazing footage is how healthy and confident these people appear. I hope they can be left alone – but that will only happen if the loggers are stopped.’ 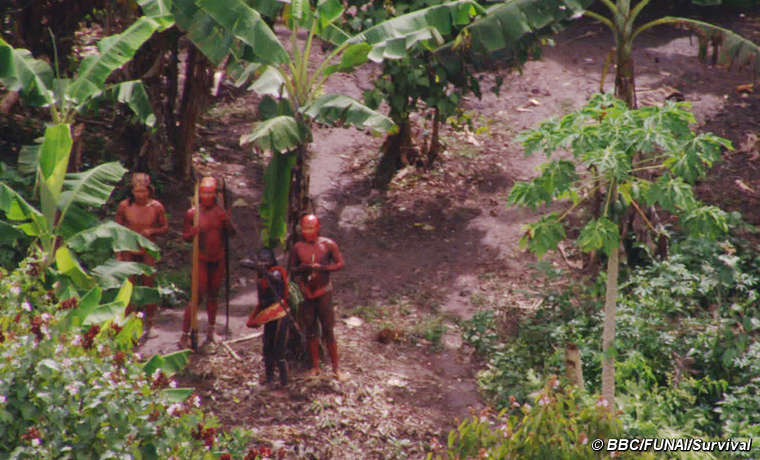 —
A still from the new footage of an uncontacted Amazon tribe in Brazil.
© BBC/FUNAI/Survival

Global coverage of the story has already pushed the Peruvian authorities into action – they have announced they will work with Brazil’s Indian Affairs department (FUNAI) to protect the area more effectively.

The Indians’ survival is in jeopardy as an influx of illegal loggers invades the Peru side of the border. Brazilian authorities believe the influx of loggers is pushing isolated Indians from Peru into Brazil, and the two groups are likely to come into conflict.

Survival Director Stephen Corry said today, ‘The very dangerous future for uncontacted tribal peoples should be of worldwide concern. Gillian Anderson’s help here will draw more attention to it – vital if the world is finally going to call a real halt to the centuries of destruction.’

The footage was filmed for the BBC’s Human Planet series, broadcast in the UK yesterday. We are not allowed to give out the footage to broadcasters or to online publishers to host themselves because of licensing restrictions, but websites are welcome to embed it using the embed code in the video player above.

Is this an ‘undiscovered’ or ‘lost’ tribe?

No. This is empty sensationalism. It’s extremely unlikely there are any tribes whose existence is totally unknown to anyone else. The uncontacted tribe in these photos has been monitored by the Brazilian government for 20 years, and lives in a reserve set up to protect uncontacted tribes.

What do you mean by ‘uncontacted’?

Who are the uncontacted people in the photos and footage?

Many tribes in this region suffered atrocities during the ‘rubber boom’ a hundred years ago, when wild rubber became an important international commodity. Many were killed or died from disease. However some managed to flee deeper into the forest. The uncontacted Indians living here today may be descended from these people.

Why have they painted and decorated themselves?

Many South American tribes use body paint as decoration and for other reasons. Red paint (known as urucum) is made from seeds from the annatto shrub. Indigenous people use it to colour things like hammocks and baskets, as well as their skin. (It is also used as a dye by the food industry.) Many Amazon tribes make black dye from the genipapo plant. Some also use crushed charcoal. Black can be used to signal hostility. Like other tribes in the region, the men have shaved their foreheads and have long hair.

How can they be filmed if they're uncontacted?

The Brazilian authorities have been monitoring this group of uncontacted Indians for years from the air. Over-flights are used to gather evidence of invasions of their land.

Indians certainly hear the plane long before it becomes visible. They will have seen many planes over the years from commercial jets to light aircraft belonging to missionaries, prospectors, and government authorities like FUNAI.

How do these people live? What do they eat? What are the foods visible in baskets?

They probably live in a similar way to many other Amazon Indians. They have cleared large vegetable gardens for fruit and vegetables, and manioc, maize, sweet potato, pumpkin, peanuts, papaya, and bananas can all be identified. They also plant cotton which is spun and woven for skirts. The men have cotton waist bands and some have small head dresses. The men carry bows and arrows for hunting – probably tapir, wild pig, deer and monkeys. No canoes have been seen (many Amazon tribes do not use them), but they probably fish as well.

Baskets are made to store vegetables and carry game and fish. (To the left of the main photo there is a pile of manioc or sweet potato, with peelings lying on the ground. The basket is full of papaya. At the entrance to the house are two baskets, one showing a carrying strap. The basket to the far right shows unpeeled tubers – probably manioc. Another is covered with banana leaves to protect whatever food is inside.)

It is likely to be very good. In the photos the Indians appear strong and healthy and their gardens are full of produce.

Why are the photos and video footage being released?

Various government officials in Peru and Brazil have denied the existence of uncontacted tribes and accuse indigenous organizations and their supporters of inventing them. The photos and footage provide clear and compelling evidence that uncontacted tribes do exist. Many tribal people recognize the importance of using the photos and footage to persuade governments to protect uncontacted peoples’ land and to uphold their rights. You can read statements from Yanomami leader Davi Kopenawa Yanomami and from COIAB, the network of indigenous organizations in the Amazon.

Survival is launching an urgent campaign calling on the Peruvian government to expel all loggers working illegally on the land of uncontacted Indians in Peru. Join the campaign.